That's right, after months of listening to other people get inducted, I'm finally in.  On the morning of April 18th, 2014 I was dutifully sworn in as an official member of the Sousalarm Club!

That's right, after months of listening to other people get inducted, I'm finally in.  On the morning of April 18th, 2014 I was dutifully sworn in as an official member of the Sousalarm Club!  Wait, what?  Don't worry, unless you listen to Temple's classical and jazz radio station WRTI here in Philadelphia (or the internet stream) you probably haven't heard of the Sousalarm Club.

I find it best to let my membership certificate do the explaining: 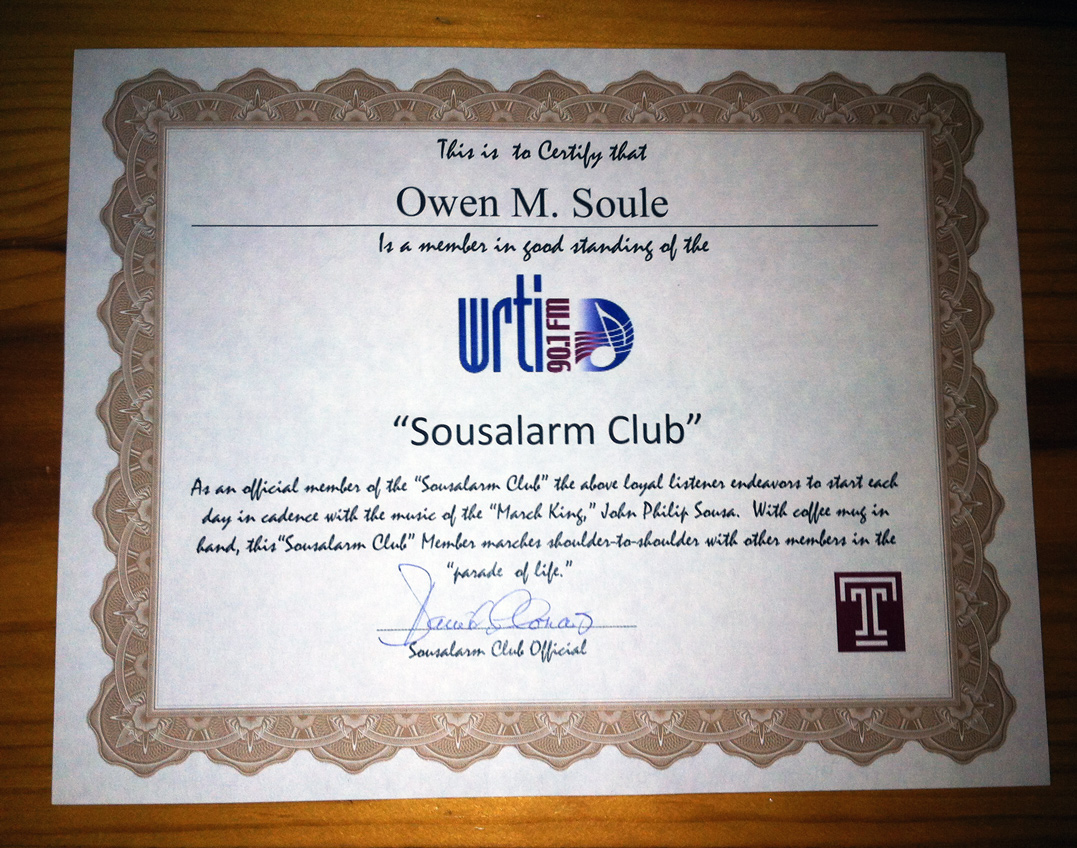 In case you can't read the inscription on the certificate:

As an official member of the "Sousalarm Club" the above loyal listener endeavors to start each day in cadence with the music of the "March King," John Philip Sousa.  With coffee mug in hand, this "Sousalarm Club" Member marches shoulder-to-shoulder with other members in the "parade of life."

There you have it!   The Sousalarm Club is for people who enjoy a good John Philip Sousa march in the morning, and quite frankly who doesn't?   Well maybe non-morning people, but that's nothing a little caffeine can't fix.

My induction didn't happen by chance, Laura wrote the host, Greg Whiteside, and requested membership for my birthday.    It was an awesome surprise since we play WRTI in our kitchen every morning and leave it on most of the day too.  An anonymous source (Laura) tipped me off about my induction, so I was able to capture the broadcast via iPhone magic (voice recorder) and laid the audio down over some random 1960's marching band footage for your viewing/listening pleasure, enjoy!

It should be noted that Greg Whiteside was on vacation on the morning on my induction, but his replacement did an excellent job.   Anyway, if that inspired you to seek membership in the Sousalarm Club, and it certainly should have, then check out the specifics for applying below:

Sousalarm
Weekday mornings at 7:15 am
Gregg Whiteside invites you to rise and shine with a variety of John Philip Sousa marches at the stroke of 7:15 every weekday morning. Join the Sousalarm Club and receive an official member certificate! Write to Gregg@wrti.org to request membership in this very exclusive club. Don't forget to include your name and postal address!

Revenge of the Entertainment Cabinet