Our new children's book about a wild turkey named Austin

Our new book is out! Peck, Peck, PECK! Austin’s Story was inspired by the true story of Owen’s Aunt Lynda, a kindhearted animal-lover from Bedford, Virginia who raised a wild turkey.

Our new book is out! Peck, Peck, PECK! Austin’s Story was inspired by the true story of Owen’s Aunt Lynda, a kindhearted animal-lover from Bedford, Virginia who raised a wild turkey. 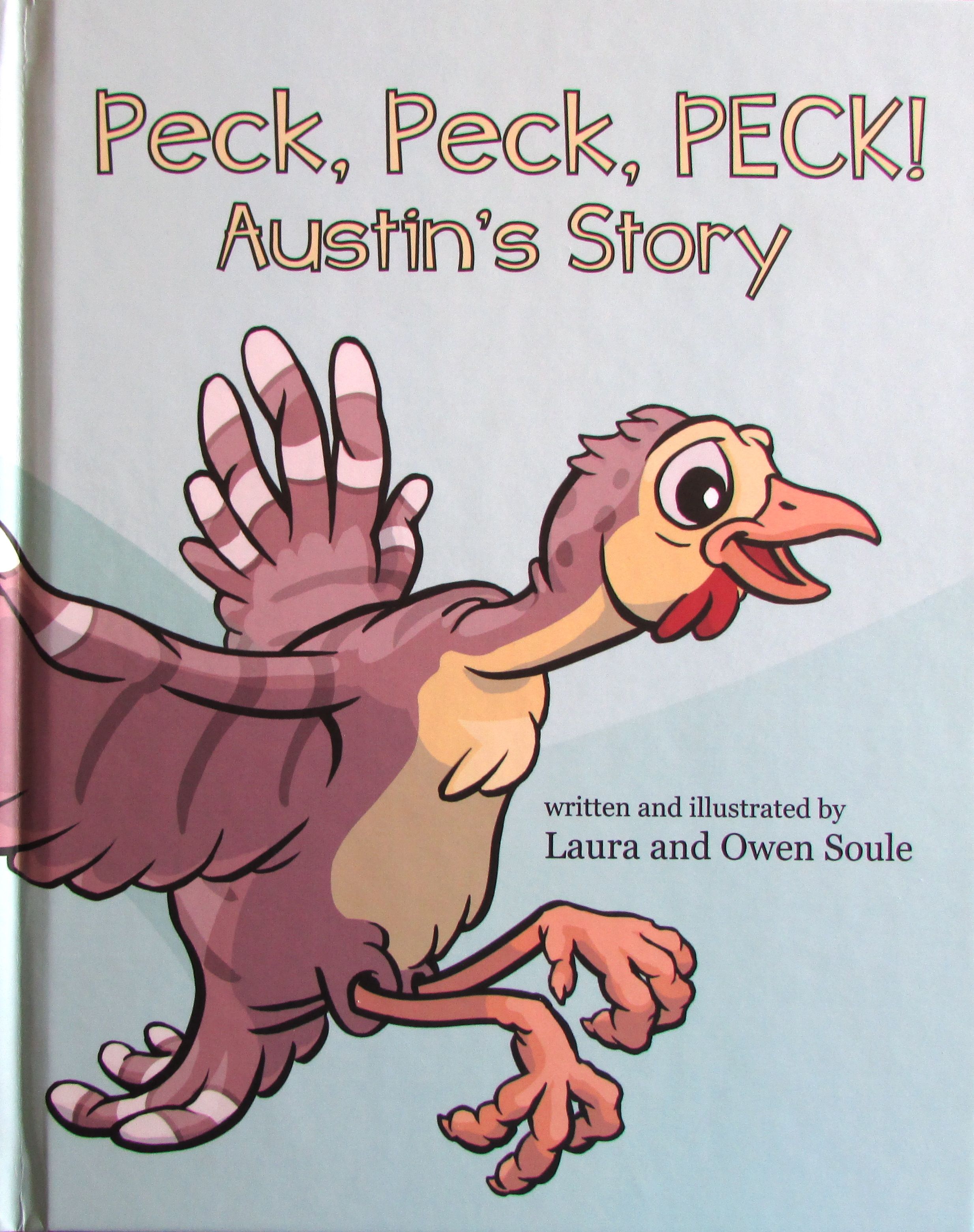 Taking care of this turkey named Austin was no doubt a very special and memorable episode in the life of Lynda and her husband Doug. Austin’s antics and personality were part of the family lore long before this book emerged.

For years, Owen’s mom had encouraged Lynda to write down the story of Austin, not only for its sheer weirdness, but as an example of Lynda’s warmth and caring nature. In early 2014, Lynda created a handwritten, illustrated book documenting Austin’s first day, which she gave to our nephew Ethan for his first birthday. In addition, she gave Ethan a more complete chronicle of Austin’s adventures, though without illustrations.

Sadly, Lynda passed away from cancer only months after Ethan’s birthday. To honor Lynda’s memory and expand on the amazing chronicle she wrote, Owen and I created this book, which contains over 40 pages of full-color illustrations. 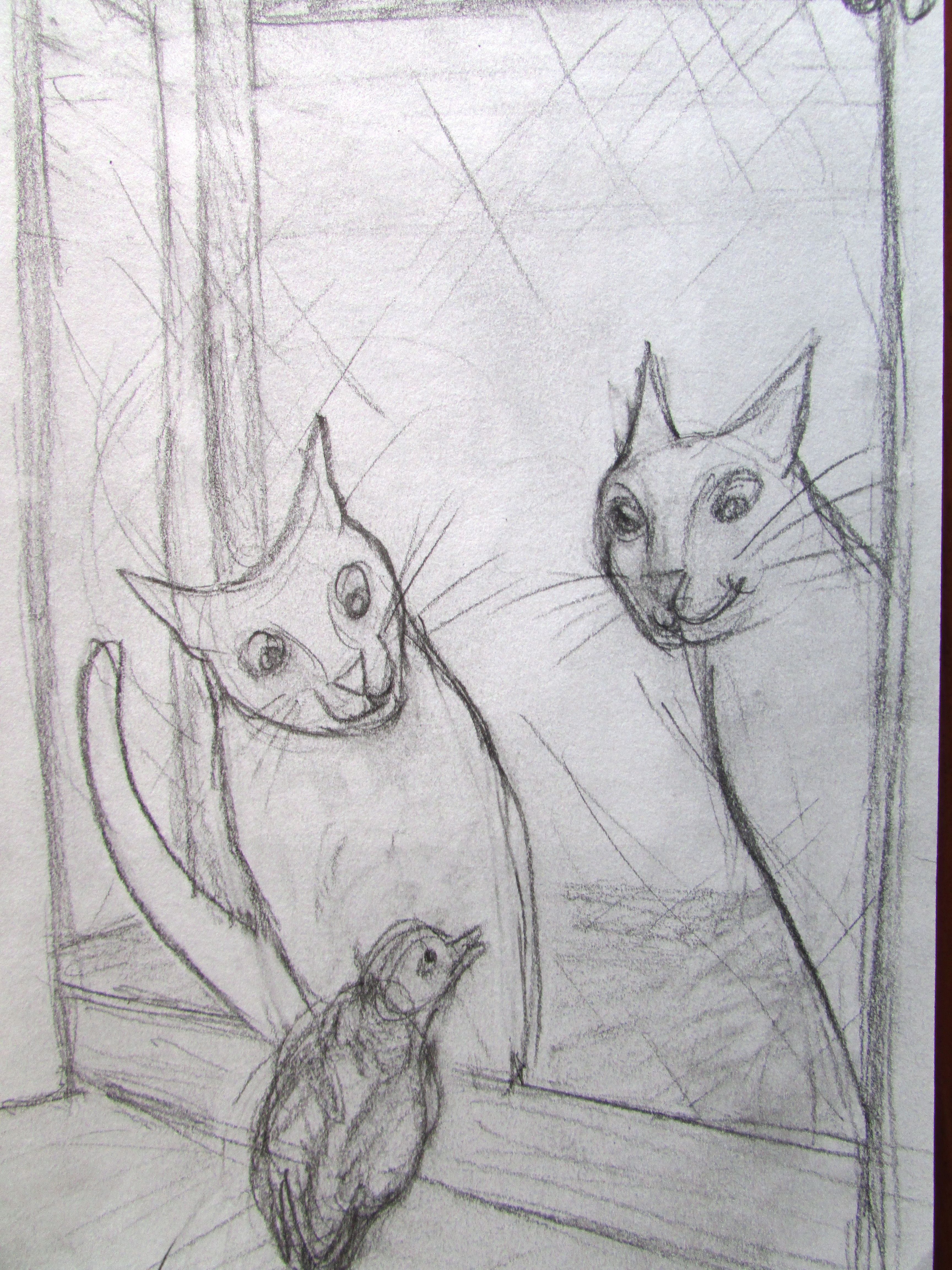 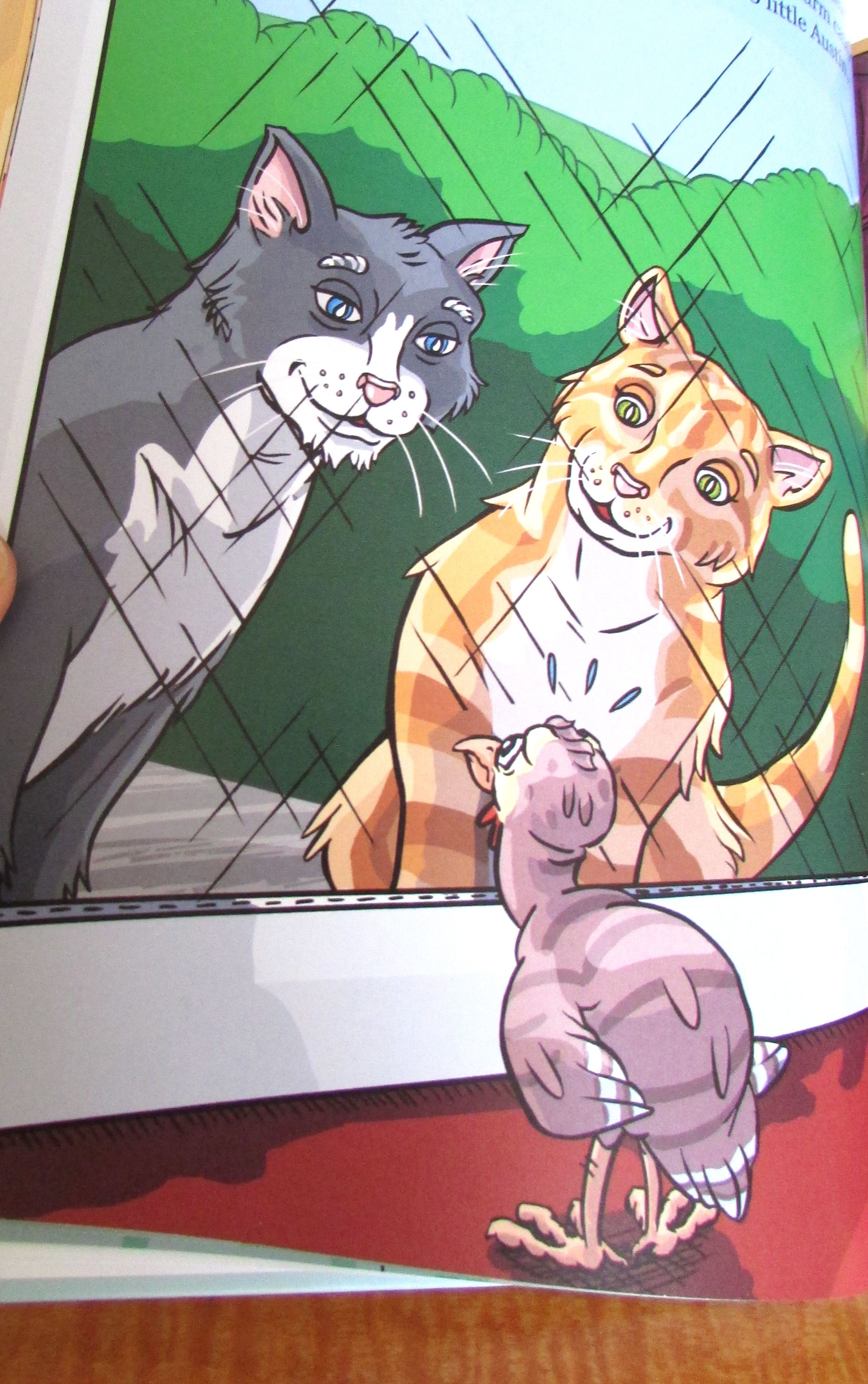 We did our best to capture Austin’s habits and activities, which, according to Lynda’s writings, revealed a bird that was sociable, intuitive, and highly intelligent. But we also took some detours from the original document and speculated on what Austin was thinking, especially with regards to his encounters with 'real' wild turkeys. 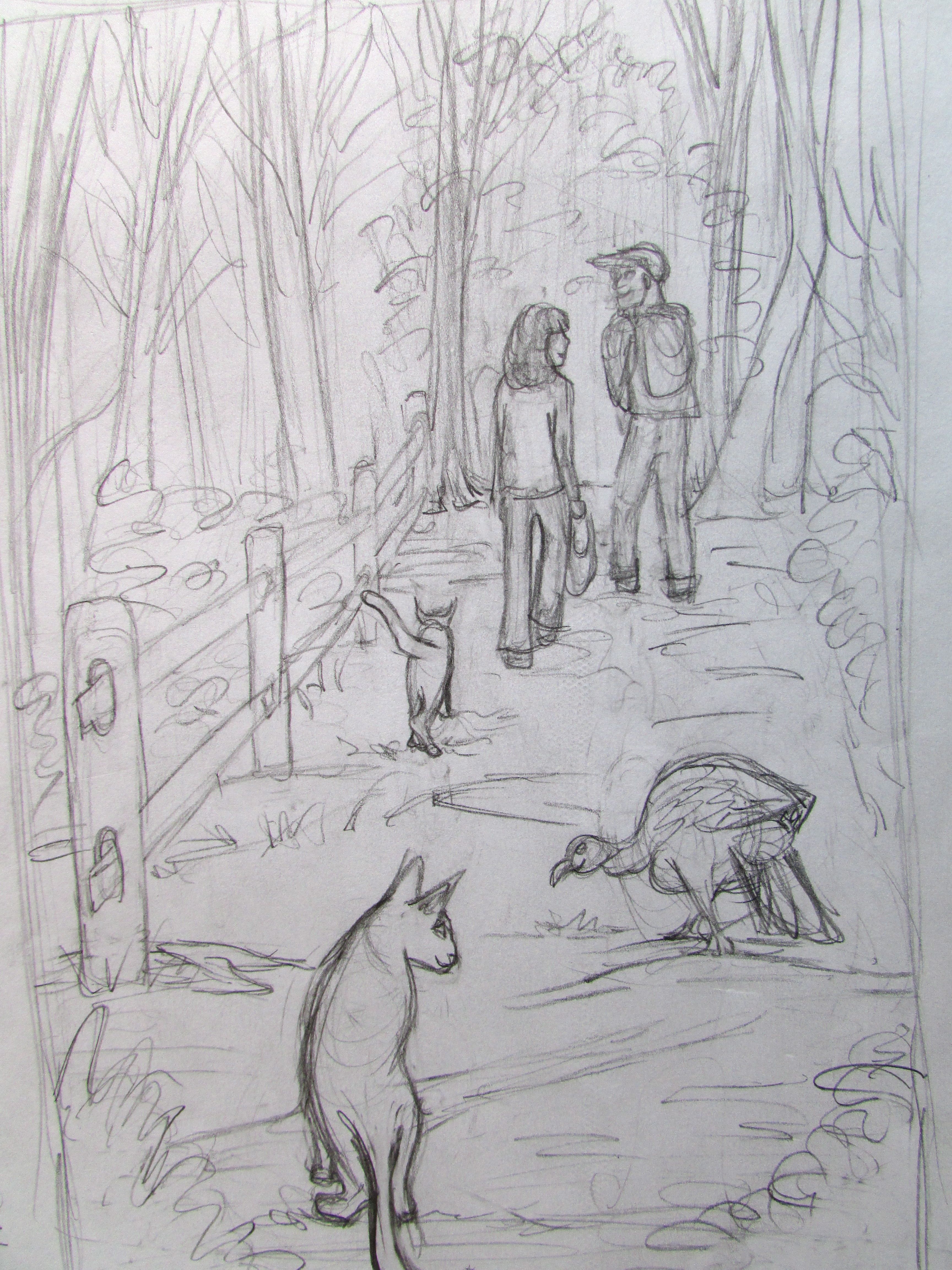 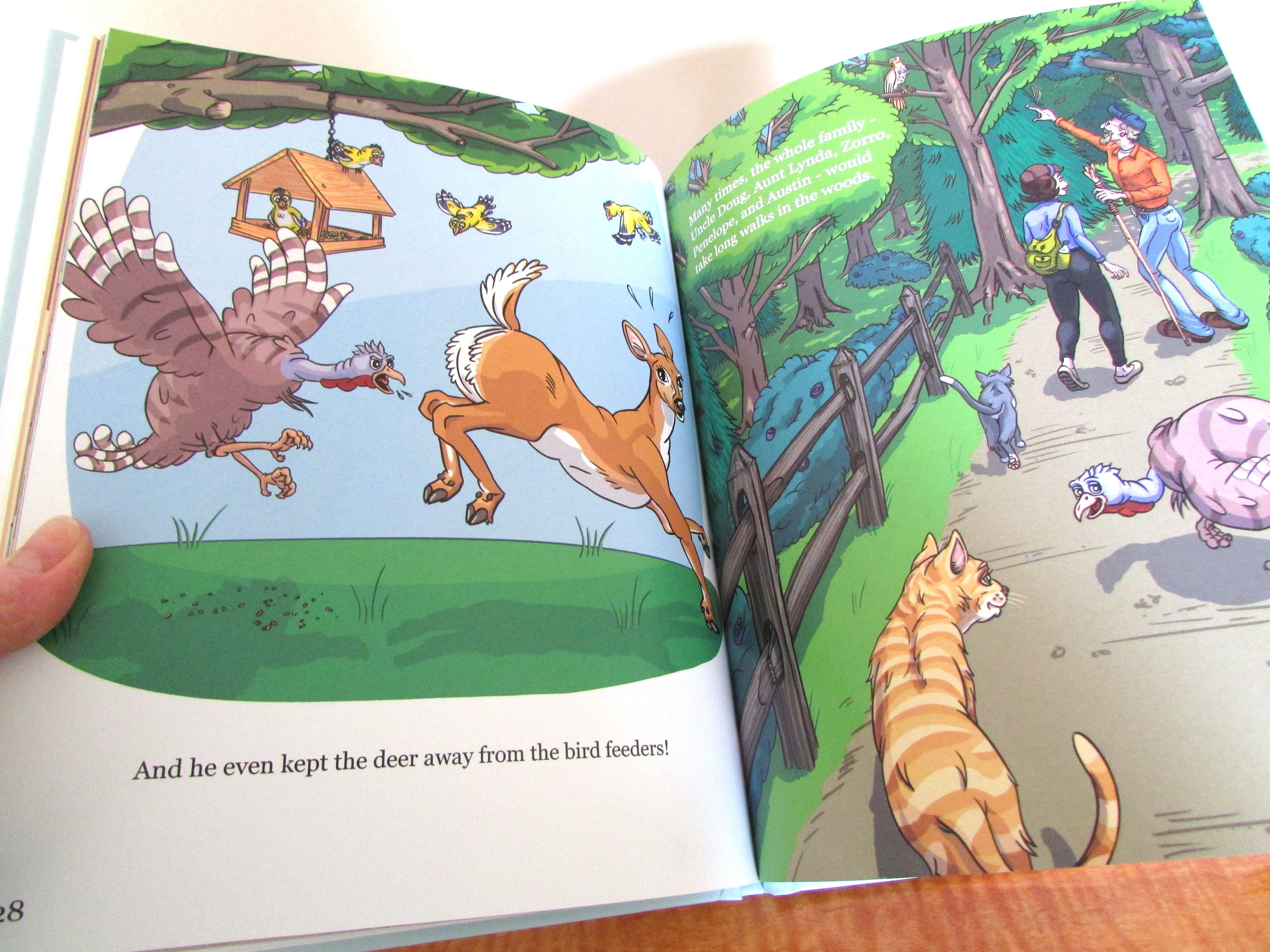 Full disclosure: Even though my name is on the cover alongside Owen’s, Owen did 90% of the work on this book, using his awesome talents in cel art drawing and coloring, which gives the book its delightful cartoon feel.

To help get the ball rolling, I adapted Lynda’s text for a storybook format, selected phrases for illustrations, and developed some concept sketches. After that, Owen took on the Herculean task of ‘making it real’. Throughout this post are some initial concepts I drew in pencil compared with Owen’s final images as they appeared in the book. 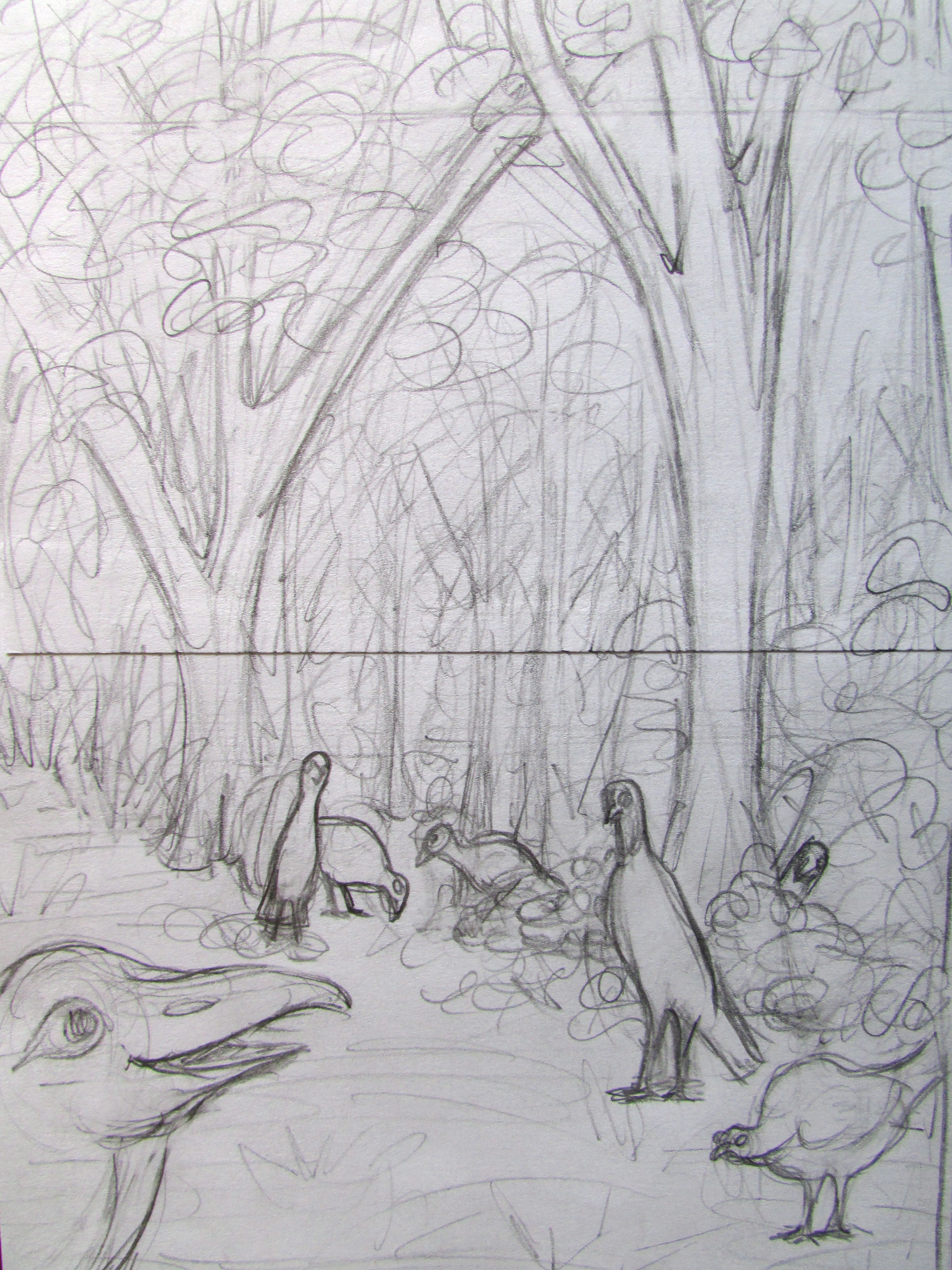 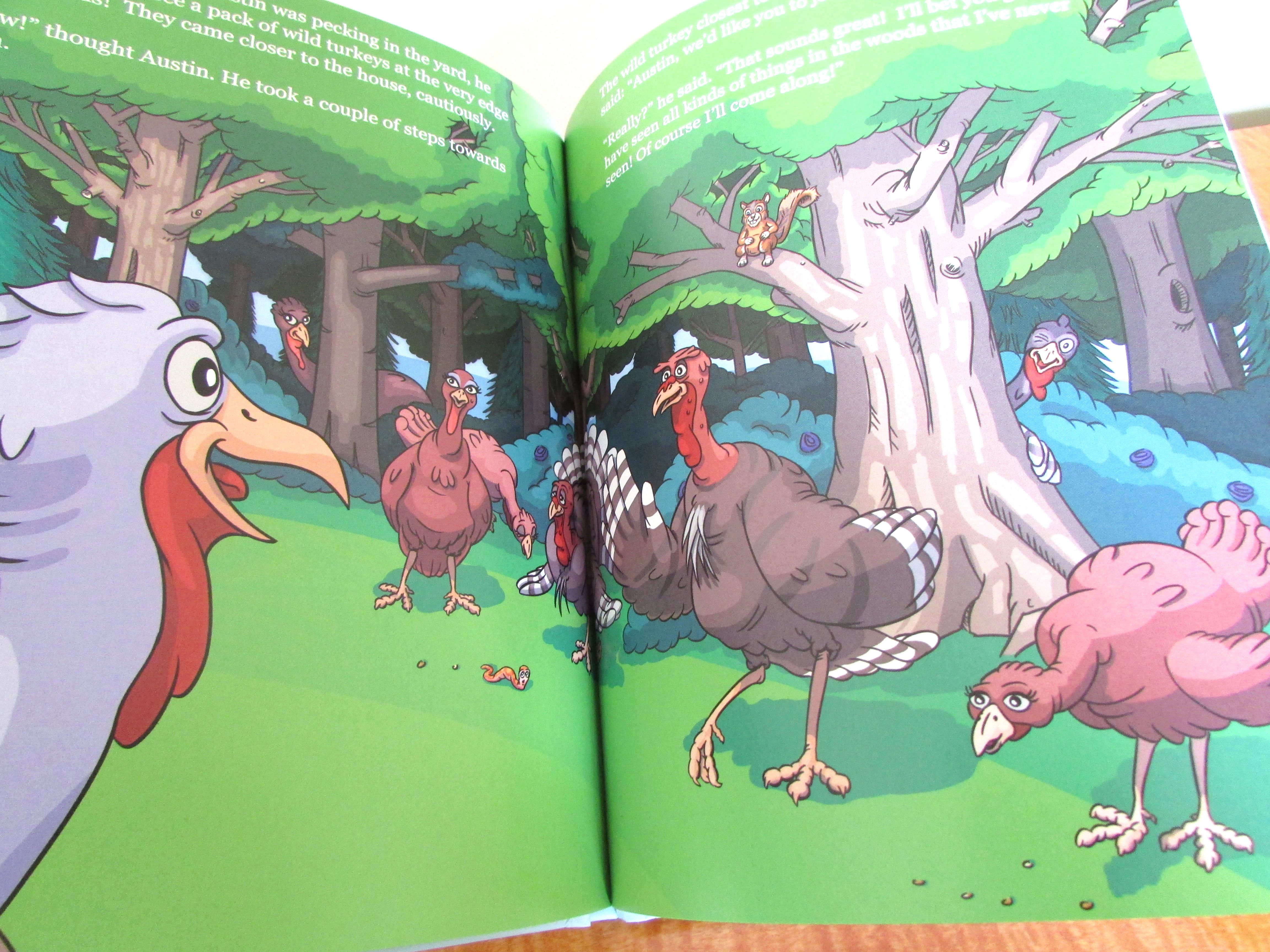 Wild turkeys, as I quickly discovered, are very colorful and visually-complex birds. In looking at dozens of turkey photos, I couldn’t imagine how one could simplify all the shapes and colors into a cartoon version, but I think Owen did a splendid job of it.

Here are some of my initial turkey sketches in various poses: 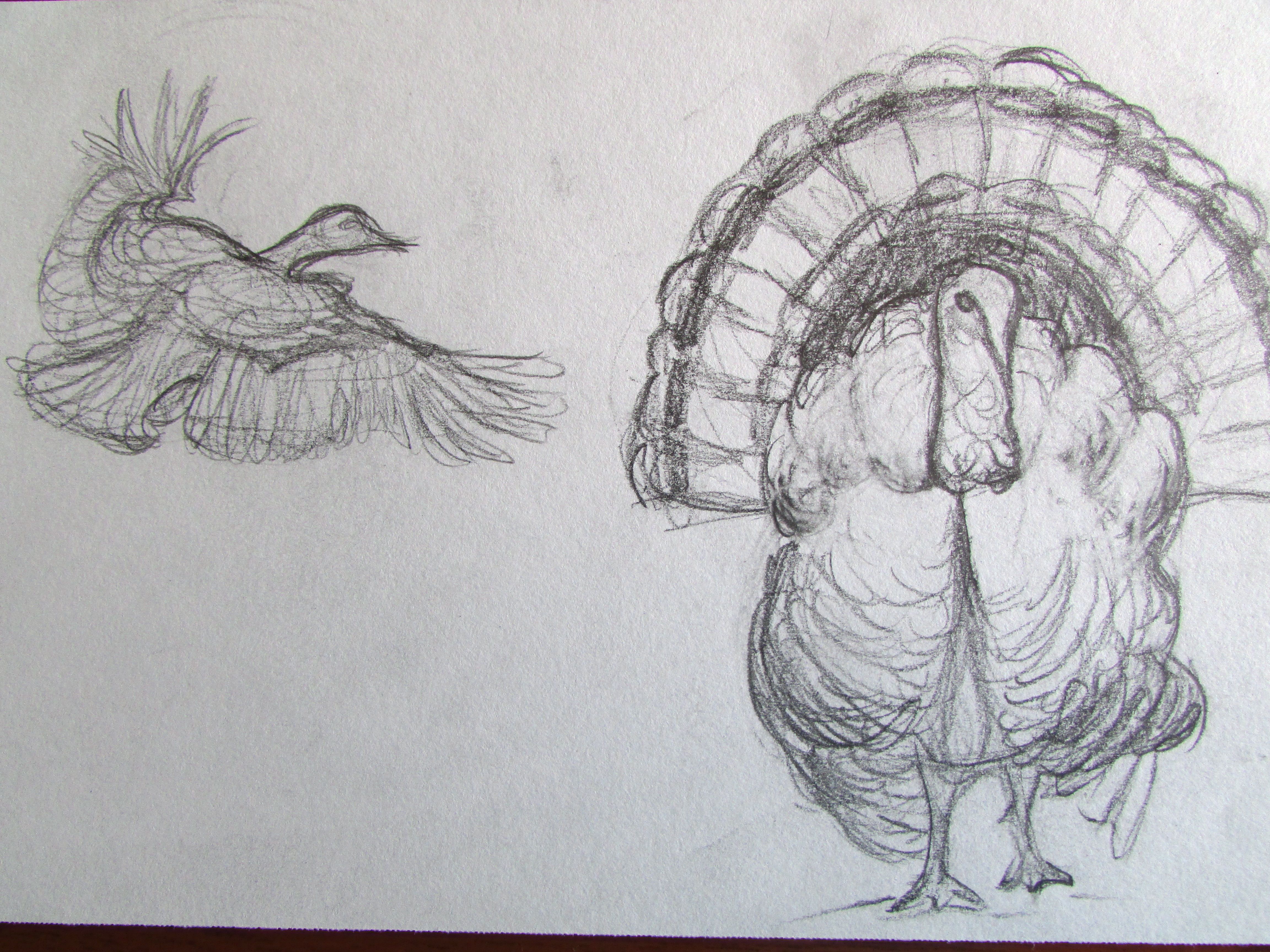 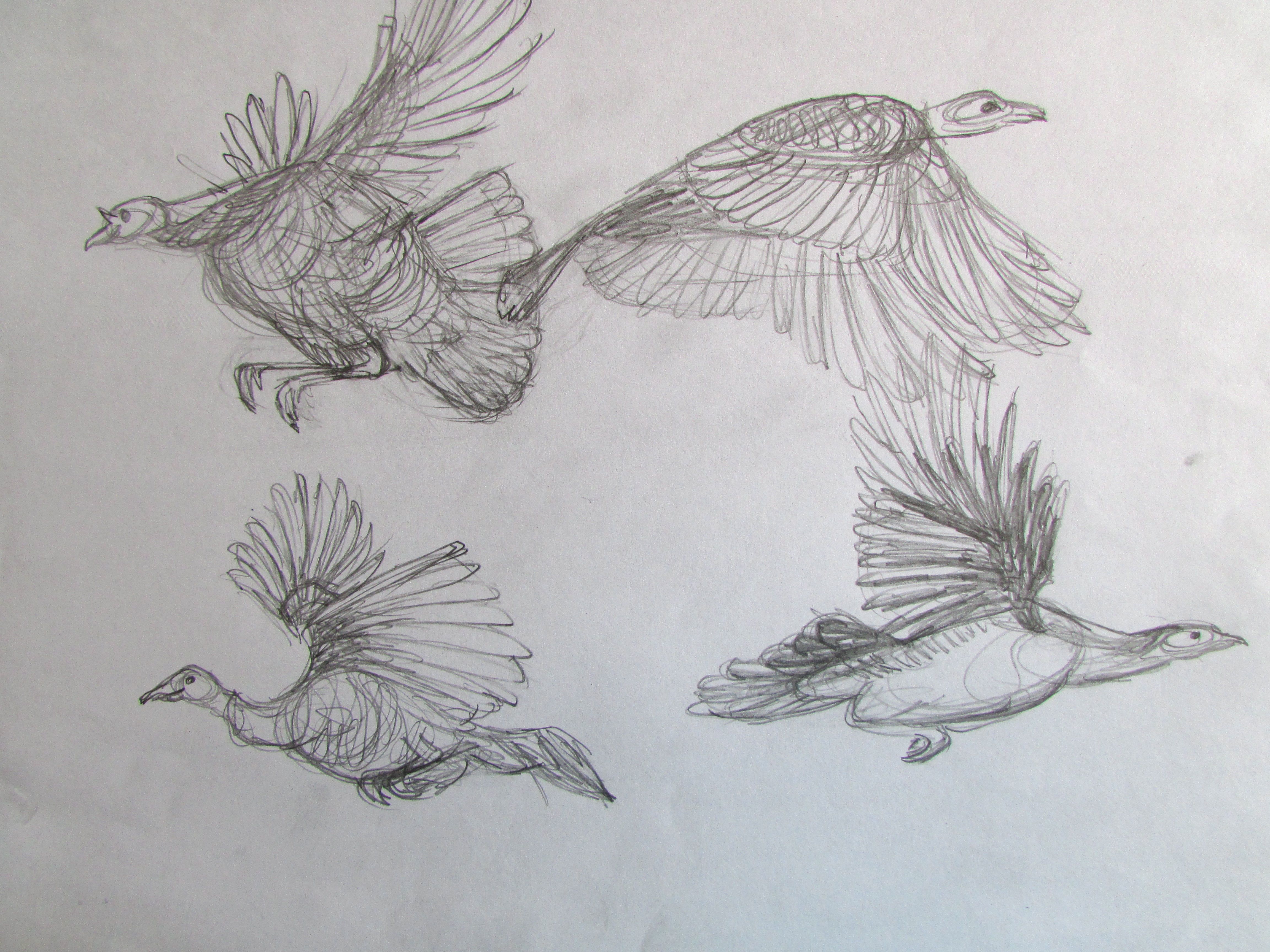 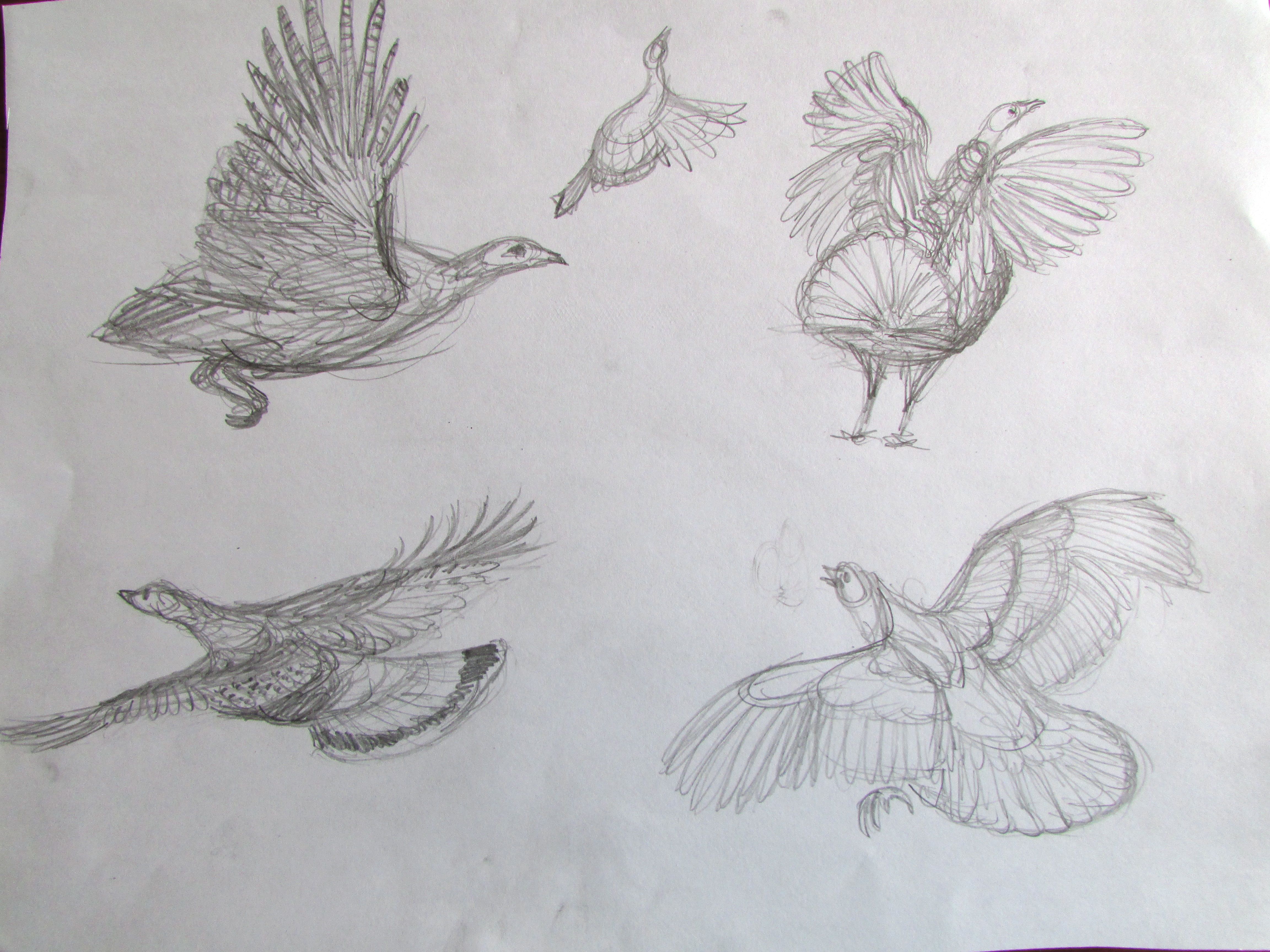 Because Owen is also adept in 3D modeling using ZBrush and an assortment of other programs, he ordered a 3D-printed sculpture of Austin just for kicks: 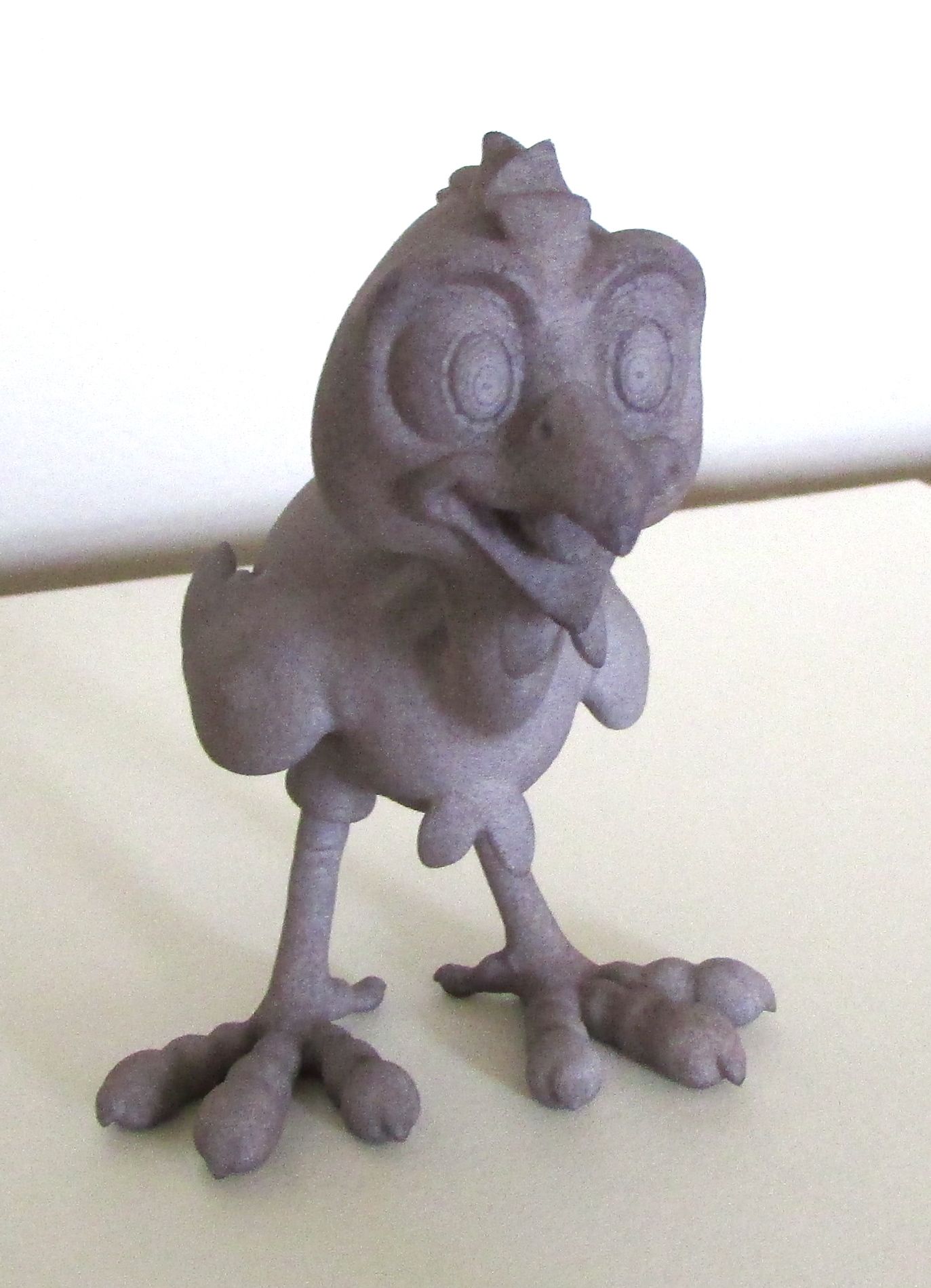 Read more about the book’s development on Owen’s blog, including the 3D model finale.

After a full year of watching Owen create these pages, it is very gratifying to hold the finished book.

Interested? Copies of the book are available at www.PeckPeckPeck.com

(PLEASE NOTE: The cost is only for printing from Blurb - there is no markup. We really wanted a colorful book with a great feel and we can assure you the quality is A+ excellent!) 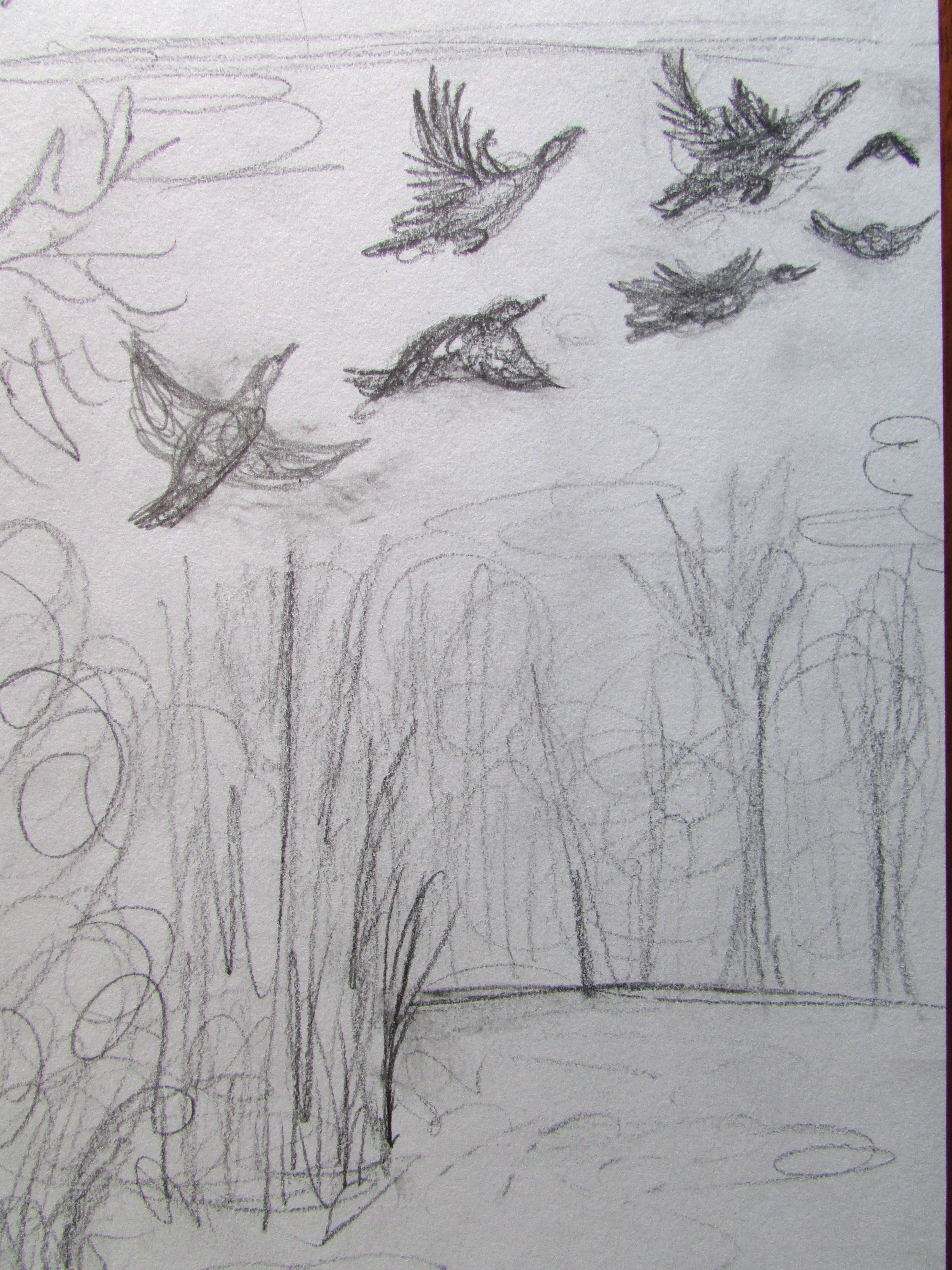 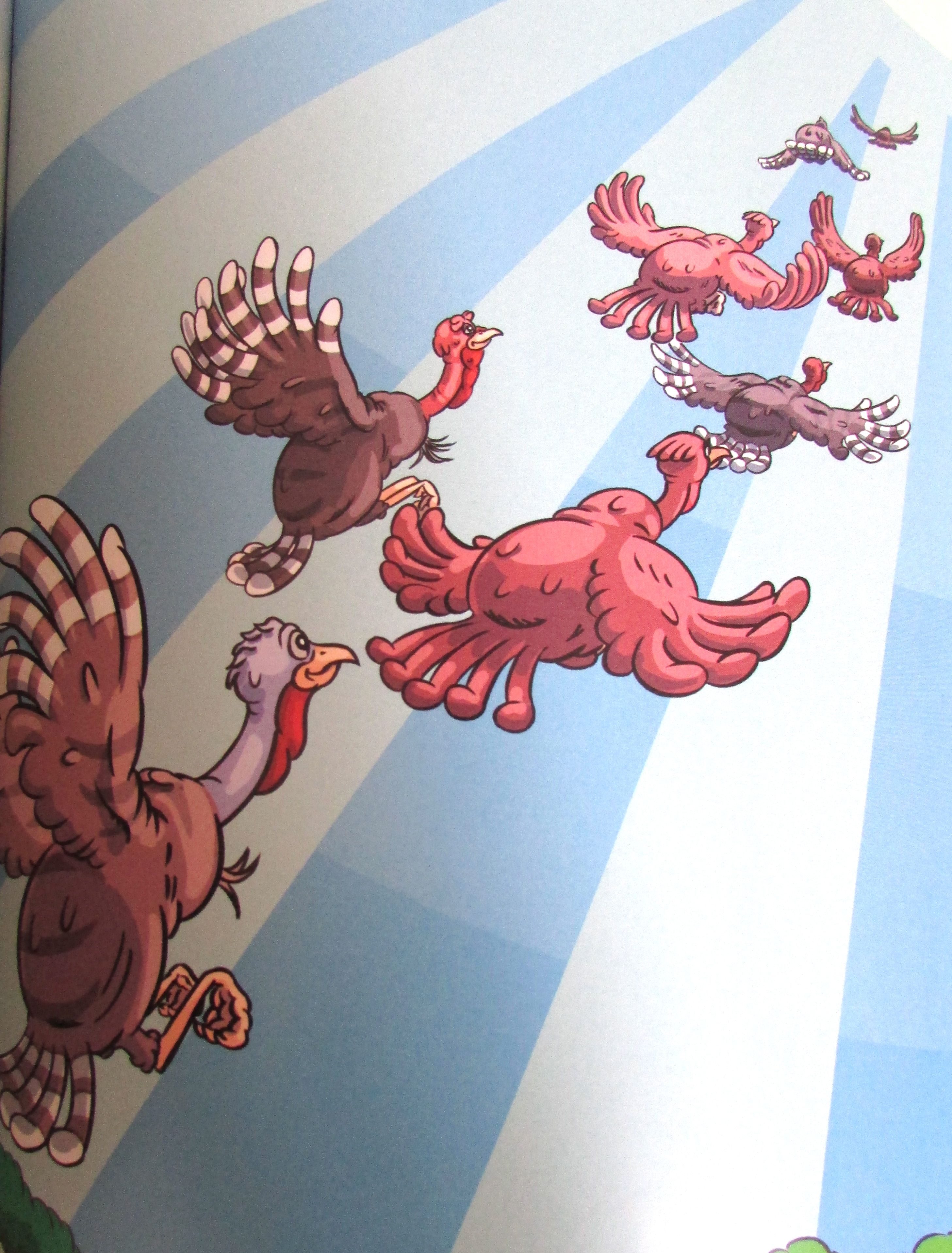 - ABOUT THE BLOG -
Initially conceived as a venue to document some home improvement projects, this blog has since expanded into other pursuits including anything from jewelry to art appreciation to textiles.

Art and art-making have always been an important part of my life. I believe there is therapeutic power in one’s own imagination, and it can be tapped through any kind of beautiful ‘object of meditation’. Whether in the form of music, photos, a good story, or the things only Mother Nature can take credit for, art nurtures our brains and souls. Like spirituality, art may not be necessary for survival but it definitely makes life worth living. Happy imagining!